We recently got the opportunity to repair a grand old staircase at this stately home near the New Orleans Fairgrounds. 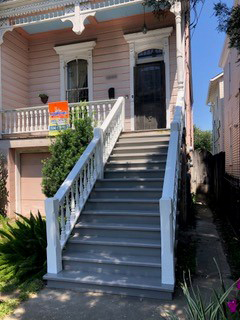 While other parts of the home were in great condition, the staircase to the front door had been battered by weather for decades. The handrails were the first to suffer irreparable damage, at which point the homeowner replaced them with pipes as a temporary measure. 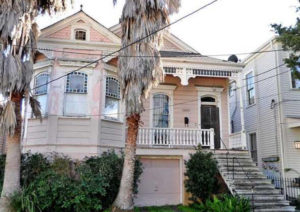 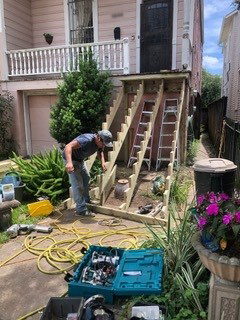 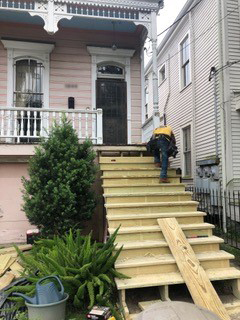 Then the treads themselves also became weak, forcing the homeowner to step carefully when mounting the stairs. A quick look under the staircase told the homeowner that it wasn’t just the treads that were weak—the risers, which the treads sit upon, had also sustained damage from weather and humidity.

The front steps were fast becoming a hazard not only for the homeowner, but also for anyone visiting the house, delivering packages, or providing utility services. The time was ripe to do something about it.

The first step in the repair process was to remove the existing staircase. Then our team put up new risers made of pressure-treated wood, which is designed to withstand humidity, rain, and other potentially damaging weather. The bottom end of the risers sits on a cement pad to prevent damage from the damp ground.

Next we added the treads and toe-kicks, and painted the staircase to provide further protection from the elements.

We were able to fabricate new handrails and posts by copying from existing ones elsewhere on house and the homeowner had salvaged most of the spindles from the previous staircase, saving a great deal of expense. Homeowners often ask us to incorporate items they already have into a repair or renovation. We’re always happy to do so, provided that the use of these elements won’t compromise safety or codes.

The result was a staircase that not only improved the house’s curb appeal, but is now safe to use. 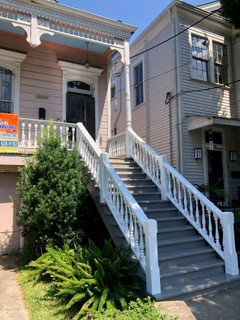 If you have a staircase that sags, creaks, or just plain feels unsafe, give us a call here at Richard Earls Construction.

Sill damage is usually due to water or termites. For this home in New Orleans’ Black Pearl neighborhood, the sill was damaged by a plumbing leak inside the walls. The leak went on for a very long time, unknown to the homeowner, and after some months or years the sill beneath the leak became damaged. The homeowner noticed the problem only when the outer walls of the home began to bulge, a problem that was caused by the damaged sill starting to sink. 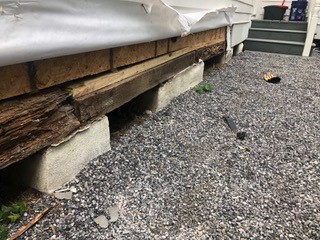 A sill, ideally stays straight throughout its life and holds the house’s joists straight, or level. When the sill is no longer straight, everything above it—joists, wall framing, floors, and even the home’s roof—can begin to go off-kilter. But unlike other parts of your home, where you can just “take a look” to see if something is wrong, sills are always hidden under the siding. Often, you won’t know something is wrong with a sill until a professional comes to take a look.

In this particular case, we were able to find the cause of the problem and schedule a sill replacement. A sill replacement requires us to use jacks to support the house while we remove the old sill. Some jacks are there just to support the house, while others are there to jack up the house by a fraction of an inch, just enough for us to pull out the old sill. (You can even be inside the house while we do this, and probably won’t notice a thing!)

Then we put in a new sill, and made sure everything was straight and supported. 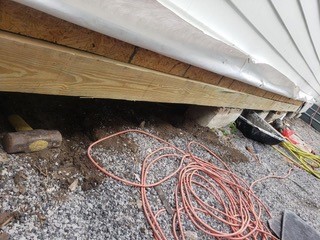 Now that the sills are solid again, the homeowner can focus on other things.

Sill repair and replacement is best done by experienced pros with professional-grade equipment. At Richard Earls Construction, we’ve done hundreds of sill replacements for many happy customers. Give us a call if you think you might need your sills replaced.

While any homeowner is accustomed to looking for visible problems in and out of the house—broken siding, damaged flooring, a leaky ceiling—problems with a home’s foundation may not be as obvious. It’s crucial to be able to recognize when your foundation is failing, so you can catch a small problem before it becomes a big one. 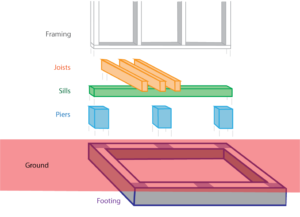 While most of your foundation isn’t readily visible, you can recognize common problems with your foundation from a careful inspection of what you are able to see inside your home.

Both these problems could be due to joists or sills that have weakened due to water or termite damage, and are now sagging or even broken. Another possible cause is piers that are cracked or sinking, which means they’re no longer adequately supporting the sills.

Fortunately, an inspection by a qualified foundation professional can locate the cause of such problems fairly quickly. You can also easily check your own piers for cracks or other damage. Sometimes a simple repair will solve the problem completely, and help you avoid costly repairs to your floors, walls, and other parts of your home.

Richard Earls Construction specializes in finding the cause of such problems and offering a professional solution. Give us a call and ask how we can help you with your foundation.

The foundation of a home is just what it sounds like—the base that keeps the home standing.

Here in New Orleans, a common type of house has a pier construction, where the home itself sits a few feet off the ground. In this type of home, the foundation consists of several layers: 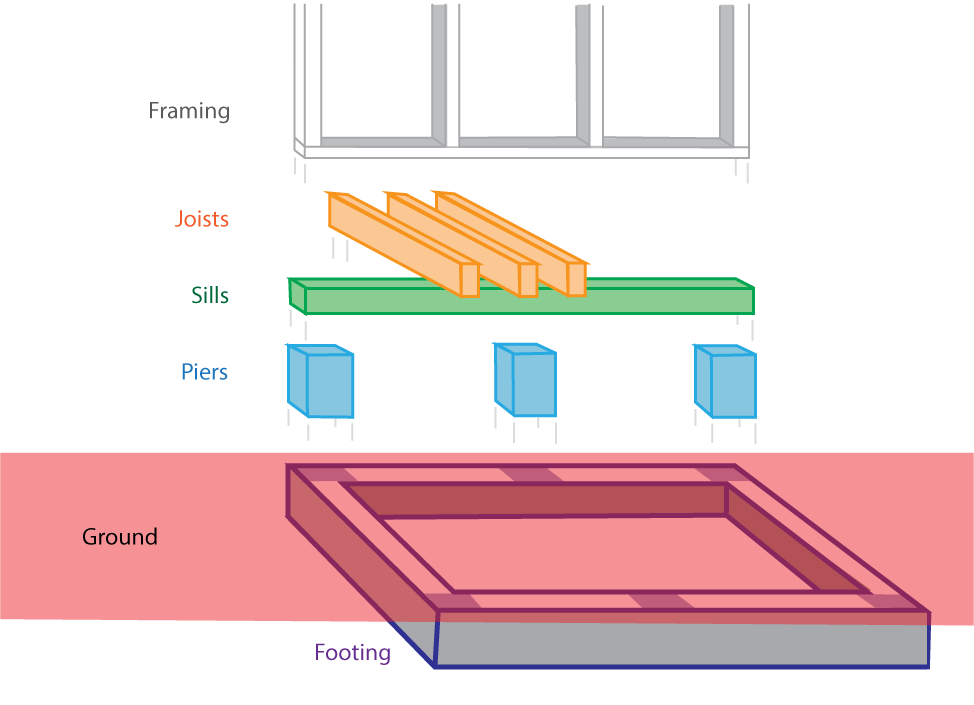 There are countless variations on these basic elements. For example, in older homes, each pier may have its own small footing underneath it. In homes more than 100 years old, there may be no footings at all, which can lead to sagging floors and damaged walls over time. Some homes feature piers that are quite wide, stretching several feet to provide a wide support for the sills.

Whatever the type of your foundation, Richard Earls Construction specializes in foundation inspection and repair, and will explain the process to you every step of the way. Give us a call to find out how we can help you with your foundation.

When you hear the word “sill,” you probably think of a window sill, that small shelf at the bottom of your window. Some folks use a window sill to display their favorite knick knacks, while others just curse the dust it gathers. But here at Richard Earls Construction, we’re more concerned with a different type of sill—the kind that holds up your house.

In the New Orleans Metro area, the older homes, and the newer homes today, are raised in the pier-and-beam style to allow for flooding. In such a home’s foundation, a sill is a long beam that keeps everything upright. Without good, strong sills, you wouldn’t have a home that could withstand a strong wind. But since these types of sills aren’t visible, you might not know they’re even there.

In a typical New Orleans home, the sills sit on piers, and they hold up the joists that support your home’s floor.  But since the sills are covered in siding, you won’t see them unless you go underneath the house or remove some of your siding.

A damaged sill can lead to problems inside the home. Uneven floors, soft or squeaky spots in your flooring, bulges in floors or walls—all these problems might be due to a damaged sill. And until you replace the sill, all your indoor renovations won’t solve the root of the problem.